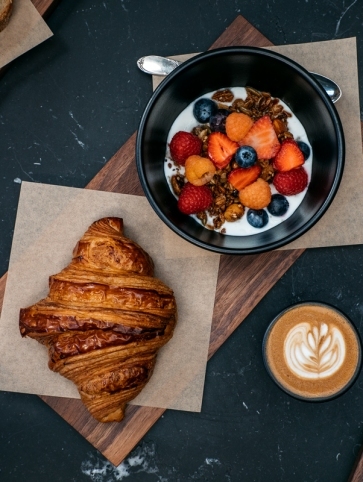 High-end coffee, brunch, and pastries plus a selection of beer and wine. 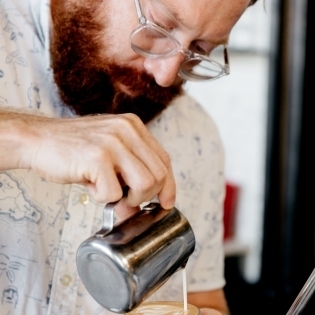 goodboybob coffee, named after owner Erich Joiner's shaggy pup, aims to find, roast, and prepare coffee with the highest standards in the world. The high-end coffee is sourced from all over the world, some being roasted in San Diego specifically for the shop. Pick up a house coffee on your rush to work, or stay awhile–there are some tasty toasts, pastries, and lunch items as well as a stellar beer and wine selection.

The booth is designed with a "people first" mentality: if you're curious about the brew, feel free to ask the espresso experts as many questions as you want. Or if you'd rather enjoy your heavenly cup quietly, this is a safe space to go unbothered.

Wines By The Glass

Wines By The Can

Wines By The Bottle 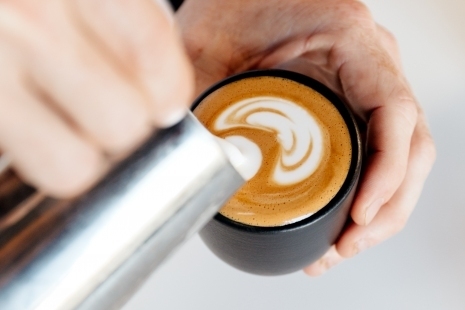 Ask about our special rare coffees – some of them are hard to find anywhere else! If you're in the mood for a latte, try it with almond milk – it's house-made, and pretty amazing.

As told by Director of Coffee & Operations Ryan Fisher

Ryan Fisher has always had a fascination with culture and community, coming back to people's experiences of others and the space around them across multiple career paths. His first exploration of these topics led him to a PhD in Anthropology and a focus on Tibetan identity in the modern world. After a few years of teaching university level courses and pursuing an academic career, Ryan had the opportunity to be a partner in a coffee shop in Dallas, TX called Oak Lawn Coffee. After 2 years and many successes he sold his share of Oak Lawn Coffee and launched a cafe and roasting company in Denver, CO called Commonwealth Coffee Roasters.

It was at Commonwealth that he began to make a name for himself in the world of coffee, helping establish Commonwealth as one of the countries most highly regarded coffee companies. In 2015, he placed 2nd in the prestigious Coffee Masters, a world wide competition aimed at naming the best all around barista. The same year he advanced to the National level of both the Brewers Cup and US Barista competition. He has advanced to Nationals 3 additional times in recent years.

In 2017, Ryan moved to LA to launch goodboybob coffee, which is now more than 3 years old and is expanding across LA, with multiple shops slated to open in 2020. As the Director of Operations, he oversees all strategic growth decisions. Ryan is also Head of Quality Control, Head of Roasting and Green Buyer, which sends him around the world in search of amazing coffee.

Throughout his career in coffee, he has sought to build cafes that reflect the character of the community and act as conduits of meaningful relationships. Ryan loves coffee, but he loves people more.